On June 23rd, a referendum was held in the United Kingdom where over 30 million people voted on whether or not the country should stay in the European Union. The Leave Campaign won by 52% to 48%, shocking Europe and the rest of the world.

To fully understand why the UK voted in favor of leaving the European Union, it is helpful to investigate factors that could lead people in the UK to be Eurosceptic.  Geographically, the UK is physically separated from other countries in the EU by water. In addition, Great Britain has in the past fought wars with many of the countries in Europe, such as France and Germany. In fact, many in Great Britain still remember the horrors of World War II. Going back to 1930, Winston Churchill is quoted saying “We are with Europe but not of it,” when describing Great Britain’s relationship with Europe (Danzig, 2015, n.p.). 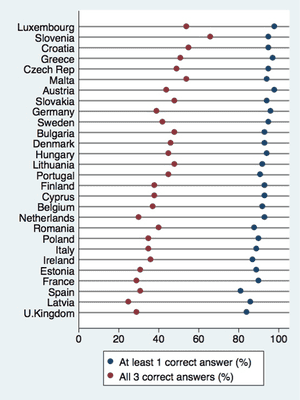 More recently, political parties such as the UK Independence Party (UKIP) and the British National Party (BNP) have popped up in response to the constant argument in the UK over membership in the EU. Both these parties gain support on issues such as lower taxation and fewer immigrants, which people feel is prevented by being a member of the EU. However, Britons are constantly ranked among the least knowledgeable countries in the EU concerning matters related to the EU. For example, this figure on the left illustrates the results of each country’s answers to three simple True/ False questions about the EU. Besides Latvia, the UK had lowest percentage of population answering all three questions correctly. The UK also scored second to last on percentage of population answering at least one question correctly.

The European Union is comprised of 28 members (including the UK) and was originally “set up with the aim of ending the frequent and bloody wars between neighbors, which culminated in the Second World War,” (Europa, 2016, n.p.).  It now serves as a free market, allowing the free movement of goods, capital, services, and people between member states. It is one of the most successful regional economic organizations in the world, and also serves as the largest source of U.S foreign investment. If one takes all the countries of the EU, their total economic power is larger than that of the United States.

However, being a member of the EU does involve countries losing some of their sovereignty. The EU is a supranational organization, meaning that its power is more than the sum of powers of individual state governments.  In addition, the free movement of people has been causing a problem for certain members of the EU, including the UK. For example, one common complaint is the amount of European workers taking jobs away from UK citizens. The “Polish Plumber” has become a symbol illustrating the amount of cheap labor coming from Central Europe to Western Europe. Although individual EU countries can choose how many immigrants they chose to let in, there are EU-wide rules allowing citizens of one EU country to go to other EU countries for work or study (Europa, 2016, n.p.).

As seen in this graph, the UK is also one of the countries spending the most money to stay in the EU. Comparatively, they are getting less money back than they are spending. Although countries like Bulgaria and Slovenia are receiving less money from the EU, they are also contributing significantly less. The question, however, remains: Were the people who voted for Brexit fueled more by the cost of membership and possible strain on the economy, or by wanting to keep foreigners out of the country? And if the answer is the latter, is that due to xenophobia, or rational concern?

Below is a picture from one of the campaign ads supporting leaving the EU sponsored by Nigel Farage, the leader of UKIP. The ad has been widely criticized for its blatant racism and similarity to the Nazi regime. Boris Johnson, the official leader of the Vote Leave Campaign, made it very clear the poster was not associated with the campaign and that he was pro immigration. However, it is clear that anti-immigration sentiments have been strong in the UK.

Just in the past year, immigration to the UK has increased to 336,000 migrants. There is a big threat of migrants and refugees coming from areas in the Middle East, especially Syria, and many people in the UK fear a “foreign invasion”. However, many foreigners are coming from other areas of Europe due to the laws on freedom of movement between countries in the EU, leading to a strong anti-Europe sentiment that helped propagate the ‘Leave’ Campaign. Even just the day following the referendum, social media exploded with posts expressing feelings of anti-immigration. Many foreigners have expressed feeling uncomfortable in their own country as a result.

Eastern Europeans seem to have been targeted specifically. The graffiti displayed on the Polish Center for Political thought is just one of many examples of hate crimes that have occurred as a result of the referendum.

Violence started increasing even before the referendum had concluded. For instance, one week before the referendum, Jo Cox, a member of Parliament in the British Labour Party and strong supporter of the Remain campaign, was murdered in West Yorkshire.  Anti-immigration resentment seems to be stronger in poorer areas, where public services are not as readily available. Although Yorkshire used to be a thriving town, its glory days have long been over and there has been a recent influx of immigrants.

Some would argue that these anti-Europe and anti-immigration feelings in the UK are justified. Many of the foreigners are coming from regions of the world where there are different cultural values and ways of life. Integration can be difficult. In addition, due to the recent terrorist attacks around Europe, one can understand why some fear that the foreigners coming in are dangerous and undesirable. There is such a high level of uncertainty as to who the people are. In addition, high costs are involved with taking in more people which can also lead to economic problems. More people in the country means more people who need to be provided for- which also causes resentment.

However, many immigrants have expressed feeling incredibly uncomfortable since the referendum. Even immigrants who have been in the UK for decades report feeling unsafe. For example, one anonymous Polish migrant reported being told to “Pack your bags and get the [expletive] out.” Followed by, “If you want I can give you a suitcase” (The Guardian, 2016).

There is currently a “Write to Remain Movement” where people can write letters to the new Prime Minister, Theresa May, to fight for the right of the 3 million EU Nationals to remain the UK. The movement has been receiving support across political parties; however, May only says she  “expects” they will be allowed to stay (The Guardian, 2016).  Supporters of both the Leave and Remain campaign have come together in an unusual consensus that May needs to take an official stance to guarantee that the EU citizens will have indefinite leave to remain. However, it appears as though she may be using the EU citizens in the UK as a bargaining chip in Brexit negotiations to also safeguard the rights of UK citizens to remain in other countries of Europe.

Just last Thursday on Nov. 4th, the High Court ruled that Brexit cannot happen until it gets approved by Parliament. Although this ruling will most likely still not be able to stop Brexit from occurring, it certainly complicates the situation. Theresa May has been insisting Brexit must happen “on time” nonetheless, and the government is currently appealing the ruling. It is unclear whether a simple “yes/no” vote would suffice or if it also requires specific legislation.

Overall, there are definitely traces of xenophobia spreading through the UK. Between the spike in violent hate crimes and strong resentment of foreigners, is is understandable but sad that so many immigrants feel unsafe in the UK. However, making a broad generalization that the UK in its entirety is also xenophobic would also be unfair. Many people did vote for the Remain side in the referendum and people across party lines are fighting for the right of EU citizens to stay in the UK. Unfortunately, there is still a deep divide within the country, and uncertainty over what the referendum means for the rest of the world.