Since the new millennium, few global issues have taken a more prominent place in the American zeitgeist than the ever vague ‘conflict in the Middle East’. From the invasion of Iraq to the toppling of Gaddafi to the Syrian civil war, the American public has been inundated with images and field reports from throughout region. Unlike its more widely covered counterparts, the ongoing conflict in Yemen has remained out of the public eye despite the toll that it has taken on innocent civilians and children. Damages of this war run the gamut of horrors, including millions on the brink of famine, an exploding cholera epidemic, and thousands of noncombatants being killed by an indiscriminate bombing campaign led by the Saudi Arabia backed coalition.

How we got here

The conflict in Yemen began in earnest in 2015, but was sparked in 2011 during the Arab Spring, and has roots that reach to the 1940’s. After the authoritarian leader of Yemen Ali Abdullah Saleh was forced out of power, President Abdrabbuh Mansour Hadi took control of the government, and immediately faced opposition and a wide variety of challenges. The group that led the uprising against Saleh, called the Houthis, continued to rail against Hadi’s government and eventually overtook most of the heavily populated northern region of Yemen. Since then, a bloody conflict has ensued between the Houthis (backed by Iran) and the Hadi forces who are heavily supported by the Saudi led Arab coalition and backed by Western nations. Civilian noncombatants bear the brunt of the Yemen conflict

The war in Yemen like many other civil conflicts, has primarily impacted civilians who have little vested interest in who wins. Typically, individuals caught up in civil conflict care more about safety, health, and access to food than any political or cultural motivation, yet they are often the most victimized by the war itself; though critical food or water infrastructure is targeted to hurt insurgents, civilians are equally affected when these resources are gone.

As of March 2017, exactly two years into the conflict, over 13,000 civilian casualties had been documented, mainly stemming from the bombing campaign. This includes 5,159 civilian deaths, and does not take into account the thousands more who have died as a result of destroyed infrastructure- resulting in contaminated water and lack of food deliveries.

According to various estimates, up to 90% of Yemen’s overall food supply and medicine is imported, which means that infrastructure is critical to ensuring the population remains fed and healthy. Of its 28 million total citizens, 17 million Yemenis are food insecure as a result of the war, with 6.8 million of these are severely food insecure putting them at risk of famine. This massive humanitarian crisis comes as a direct result of the Saudi coalition and its bombs, which put roads and other critical infrastructure out of commission in an attempt to starve out the Houthi rebels. Unfortunately, this strategy also starves out thousands of innocent civilians and has exacerbated one of the worst humanitarian crises since World War II. 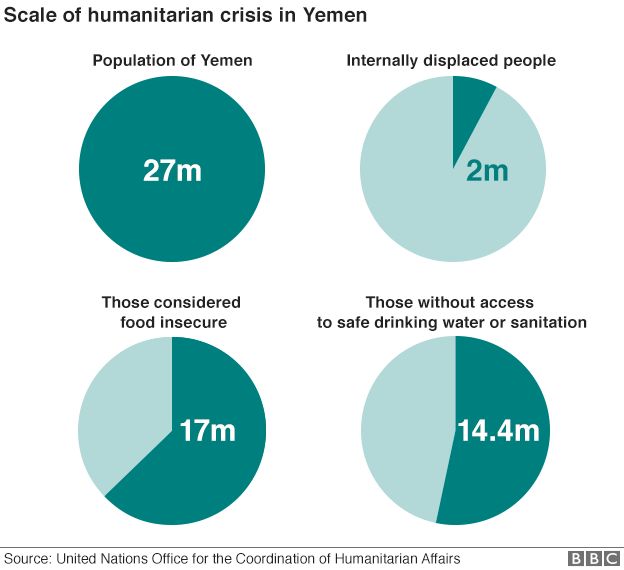 In addition to the food security crisis in Yemen, a parallel outbreak of cholera has wreaked havoc on the country’s most vulnerable citizens. Again, this crisis is man-made, resulting largely from the coalition bombing of key infrastructure. The bombs have destroyed clean water and sanitation systems, leaving over 15 million Yemenis without proper sanitation access. Of these 15 million, over 600,000 have acquired cholera, killing over 2,000. This crisis is yet another on the long list of afflictions impacting the Yemeni people, almost entirely as a result of the war.

In September of this year, Amnesty International experts identified an American made bomb among the rubble of a destroyed residential building, in which 16 civilians were killed and 17 more were injured. Unfortunately, this American bomb is likely not an anomaly, seeing as the United States is the world’s largest exporter of conventional military weapons, and has consistently sold Saudi Arabia billions of dollars in tanks, fighter jets, and bombs.

Knowingly selling weapons to a military that is known to use these missiles for indiscriminate or targeted civilian strikes is banned under the 2013 Arms Trade Treaty, but more importantly is part of a greater moral obligation to prevent atrocities in war such as those in Yemen. According to a UN Security Council panel of experts, in a hearing from January 2017:

In 8 of the 10 investigations, the Panel found no evidence that the air strikes had targeted legitimate military objectives. For all 10 investigations, the Panel considers it almost certain that the coalition did not meet international humanitarian law requirements of proportionality and precautions in attack. The Panel considers that some of the attacks may amount to war crimes.

Well after this study was made public, the Trump administration sold a package which includes $4.6 billion worth, or 104,000 bombs of the same type used in the September apartment building attack and many others like it. It is up to the United States government and other western nations such as the UK and France to be more responsible in how and when it assists allies such as Saudi Arabia.

The US Senate, in an encouraging move, has become more supportive of restricting arms sales to Saudi Arabia, with votes on the restricting the same type of sale going from 71-27 against restriction in 2016 to 53-47 against restriction in 2017. This shows that Senators are becoming more serious about providing strict oversight over sales of arms when there is knowledge that human rights abuses may come as a result of the sale.

As evidenced by the shift in the Senate, a significant shift of public opinion in the United States and greater awareness of the humanitarian crisis in Yemen can help prevent future sales of bombs that could exacerbate the crisis. While the war itself has not been caused by the United States by any stretch of the imagination, it is undeniable that American support has kept the conflict running at its pace, and American action can certainly change the course of the conflict. The US is the coalition’s main supplier of bombs and is a major ally of the air campaign, providing critical in-air refueling to Saudi jets, meaning that the coalition is heavily reliant on (at minimum) US tolerance of the state of affairs. The United States can and should use its influence on Saudi Arabia and the coalition to demand a change in behavior and encourage a political resolution to the conflict. The US should also use its power at the United Nations to do everything possible to sponsor commissions of inquiry into potential human rights abuses in Yemen. In the meantime, it is crucial that more people are made aware of the civilian victims of the conflict, and those who can help should place Yemen at the top of their list.

If you wish to help humanitarian efforts in Yemen, consider donating to the International Rescue Committee, who is working hard on the ground to increase food security and expand access to proper sanitation for those impacted by the conflict.